You are here: Home / About Us / Our History 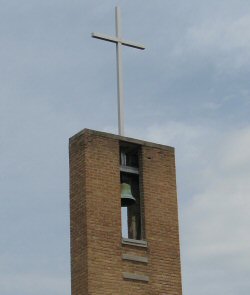 Transfiguration owes its existence to a small group of Episcopalians who dreamed of organizing a mission in the Palos area. Early in 1950, the local newspaper carried an announcement inviting all interested persons to a preliminary meeting at the home of Mr. and Mrs. James Cassidy in Palos Park.  The response was enthusiastic and more than 40 persons attended on the evening of February 26, 1950 to hear Bishop Conklin outline methods of organization and suggest preliminary procedures. After the meeting, Bishop Conklin wrote, “I think the Church of the Transfiguration fits the Palos area, since the Transfiguration took place on a mountain. You may even select a site that is on a hill.”

The Rev. J. Bradford Pengelly, of Leamington, Ontario, became the first priest-in-charge of the new mission. The first service was conducted on Palm Sunday, April 2, 1950. During the same year, two services of confirmation were held, with a total of 39 persons confirmed. On April 26, the first Church School was held and the newly formed Woman’s Auxiliary held its first meeting at the home of Mrs. Harry Tuttle. An Altar Guild and acolyte class were formed and officers were appointed. The new mission was off to a great start.  Father Pengelly served until the autumn of 1952.

In October of 1953, Rev. Roger Marxen came from Bloomington, Illinois to become the priest-in-charge. Meanwhile, a house in Palos Heights was secured as the rectory, the present five acre site for the church was purchased, a building committee formed and bids were entertained for construction of a church building. In 1954 the original church building was completed and was described as “located on the most beautiful site for a church” by Bishop Conklin. In April, 1957 two significant events took place: the mission was able to achieve parish status and the election, by ballot, of the first wardens and vestry took place. The first officers of the new church were: Senior Warden Donald Bond; Junior Warden Jack Kitch; “Vestrymen” George Buckley, Gustav Carlson, Richard Darby, Royle Freer, Harry Giegler, John Grenier, John Johnson, Robert Nachtrieb and Zay Smith. In the spring Father Marxen accepted a call to Jacksonville, Florida.

The Rev. Chester Hand of Rahway, N. J. was installed by Bishop Burrill as the first Rector of the Church of the Transfiguration in 1957. In 1958 a very generous gift of land to the church by Miss Lydia Thieme made possible the building of a permanent rectory on the adjoining grounds of the church. The rectory was completed in the summer of 1960. Thus, in the course of a decade, the Church of the Transfiguration had become a reality, with church edifice and rectory completely free of debt. Most importantly, the church had a dedicated and growing body of parishioners who were making their mark in the Palos community. 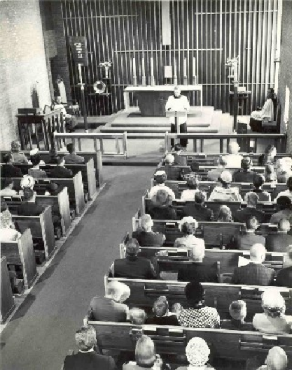 On February 19, 1963, the Rev. Robert Fosse and family moved into the rectory and joined Transfiguration. During Rev. Fosse’s term, a new sanctuary with windows oriented toward the southwest was built to accommodate a much larger congregation. The new sanctuary was strikingly modern in design, yet nodded to Medieval churches with its high, narrow nave and excellent acoustics.

In 1968, Rev. Keith Leach replaced Father Fosse, who had moved out west. He was assisted by the Rev. Janet Mackintosh (the first female priest in the diocese), and Henry Townes, Deacon. During these years the church continued to grow. Fr. Leach encouraged ecumenical studies with other congregations and faiths. He challenged conventional thought by encouraging Christian outreach, the integration of women into active roles within the church, and the gifts of children as active members of the church.

During his tenure, a new Roderer tracker pipe organ was added to the choir loft, and the church’s symbol, a uniquely designed cross, was placed behind the altar. In 1990, a second expansion created a much larger fellowship hall, with a large kitchen and enlarged space for the Palos Park Episcopal Day Care and Learning Center. Father Leach retired from the Church of the Transfiguration in 1991.

In 1993, Rev. Paul A. Lautenschlager joined our church community. Father Lautenschlager helped to expand our congregation from a community to a regional level by encouraging active outreach ministries and expanding the choir.  He also encouraged members to expand our outreach efforts. Fr. Paul answered the call of another parish in Colorado Springs, CO in 2001.

After a two-year search, the Reverend Lane A. Hensley joined our congregation in 2003. Under his leadership, the church expanded its presence via our first website. He was also the first police chaplain for the city of Palos Park. During Rev. Hensley’s tenure, we initiated a relationship with our companion diocese in S.E. Mexico, most notably through the development of a long-term relationship with La Transfiguración, in Nuevo Progreso, Mexico. Fr. Lane accepted a call to St. Margaret’s Episcopal Church in Palm Desert, CA in 2010.

Transfiguration called the Reverend Nicholas Romans to join our congregation in 2012. He helped our church family to grow in joy and love for one another and to engage more deeply in the life of the church and its mission. Fr. Nicholas served Transfiguration until 2017.

Following a one-year search, we welcomed the Reverend Annette C. Mayer from Fort Worth, Texas as our priest-in-charge in March 2018. Blessed with her leadership and experience, we are continuing our faith journey together. 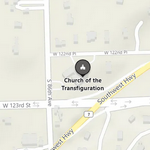